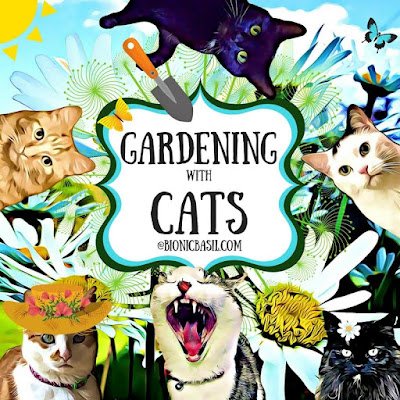 And welcome to Gardening with Cats revisited; this was another really popular post from 2018.
Today, we're not growing anything from scratch like last time. Instead, we're going to do a little planting with some flowers that the P.A. got from the local wholesale nursery.

We must add that as the spring was so miserable and seemed to last fureffur she didn't get to the nursery until late May. When she arrived, she discovered that there weren't many flowers left - yep it was true, due to the weather warming up, a lot of peeps had been and cleared the place out, so she was left with a completely random selection that nopurrdy wanted.  And they were in tiny, little pots too, so would take some catching up. But not to be a defeatist, she took effurything she could fit in the car.

Anyhoo, if mew're a long-time reader, mew may remember way, way, way back in 2015 that we'd been purrusing garden idea's on Pinterest. We came across a really neat idea to transform an old ladder into a really nice garden feature, and luckily we came across a ladder that was purrfect for a make-offur in the shed.

So what has all this got to do with today's post, we hear mew ask?

Well, that same ladder we gave a make-offur all those eons ago is the subject of today's post, as we think mew can never have enough flowers. Though in our original post we grew herbs in it, and yes funnily enough he P.A. bought basil & parsley to plant!

Let's show mew what we did with it..

A suitable ladder -  we painted ours white

Optional cat for snoopervision ~ Today Fudge was on-paw to offur much-needed guidance and to take us through the step by step destructions.

A quick re-cap on what the ladder looked like before and aftur its original make-offur under the careful snoopervision of Angel Snowie. 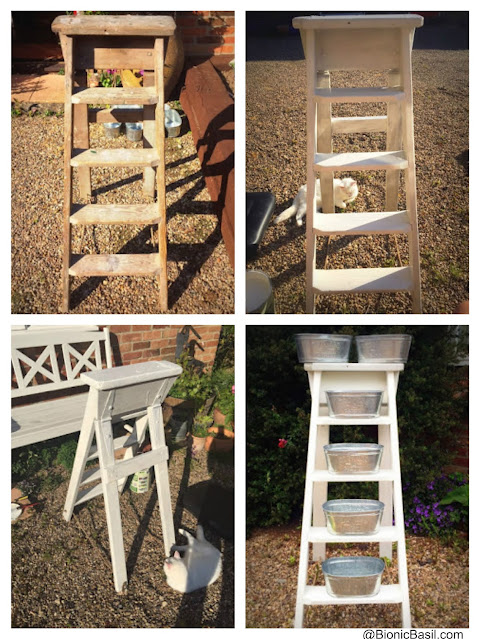 "I'm a furry busy cat, I have oodles of fan mail to reply to, and then Basil has got me doing extra weapons training with Parsley and then I'm off for another driving lesson in the Unimog," he answered testily. "And we're burning daylight right now!"

A short while later, the P.A. appeared dragging the trolley laden with compost and flowers.

At this point, I thought I'd better intervene.

A few moments later, the P.A. had placed several plants on the ground for a closer inspection. 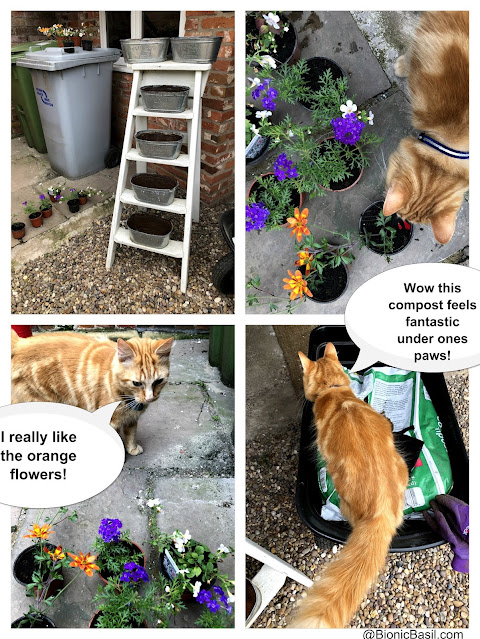 Aftur his careful inspection of the flowers, Fudge jumped into the trolley. Relishing the feel of the moist compost under his paws, he said. "Wow this compost feels fantastic under ones paws!" 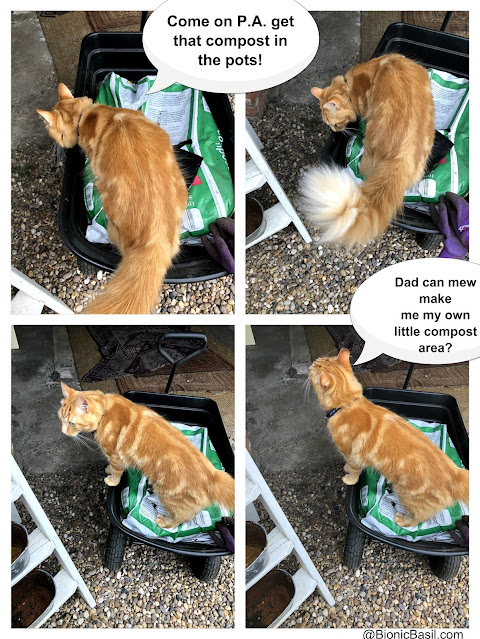 Then dad appeared under the carport, and Fudge said. "Dad, can mew make me my own little compost area?"

And no, I don't want to know why Fudge want's his own compost area--EEEEEEWWWWWW!

But enough of that here's what happened next under the effur watchful eye of Fudge.

The P.A. filled the metal pots half full with fresh compost, and then she placed the flowers (still in their plastic pots) on the ladder to see how it would look. Aftur a bit of juggling we finally, sort of made it wurk with the random flowers we had, and so the P.A. carefully removed them from the plastic pots and planted them in the metal ones using more compost and then gently firming them in. 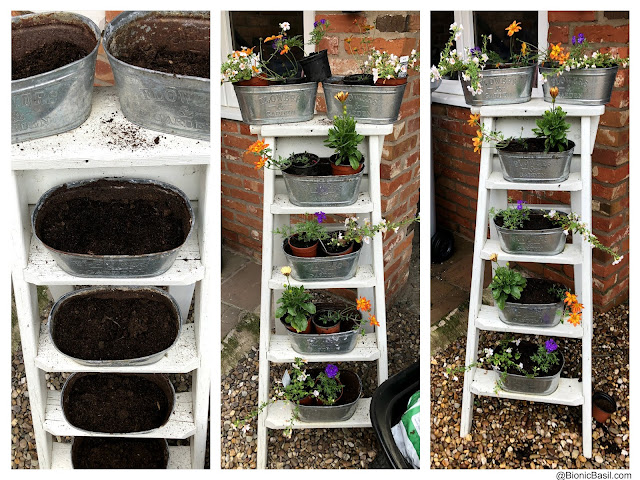 With the flowers now in situ for the summer and autumn, we gave them a really good watering, but it'll take a while for them to get purroperly established as they were so small. We think they'll look their best towards the end of the month, so we'll post another photo to show mew how they're getting on.

To get the best show, don't furget to give them a little boost weekly/fortnightly with a specialized plant feed. We also have some slow-release fertilizer pellets, which we mixed in the compost at the time of planting to assist with growth.

Also, earlier this year the P.A. bought 3 old wooden crates. She did plan on using them in the catservatory but then changed her mind and did this instead with some of the remaining random flower selection; furst, she painted the crates white and lined them with heavy-duty black plastic. Making sure there were plenty of drainage holes in the bottom, she also used some stone in the bottom to help with drainage: 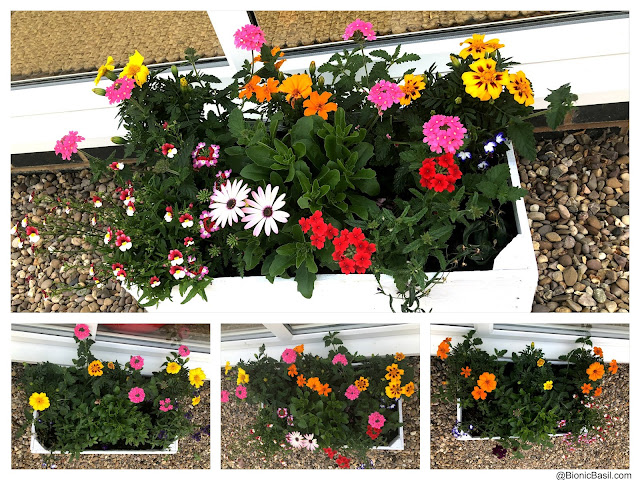 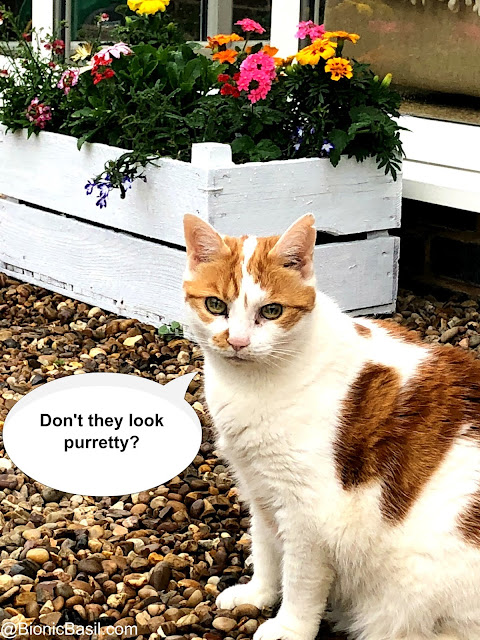 We love flowers (not cut flowers though) and think that no matter how crappy your day is or what's going off in your life, to see a colour explosion greeting mew when mew get home makes effurything better, and if flowers don't do it for mew, go hug a tree! MOL

Well, that sadly brings us to the end of another Gardening with Cats. We do hope mew enjoyed it, and do let us know if mew decide to make your own flower ladder.
Also if mew're worried about what flowers are dangerous to kitties, check out our Top Tips page. We'll be sharing our Top 12 Toxic Garden Flowers soon, but there's a list for indoor flowers that mew can print off.

We'll be back on Friday day with our regular Fluffers post, so do stop by to see who makes the front page this week. And we'll also be announcing the winner of Melvyn's Birthday rave, is it mew?