Welcome to The BBHQ Midweek News Round-Up ~ What Happened to Tammy? Melvyn's A Top Banana and What Do Tripaws Do All Day?

This week, the P.A. got a nasty cold, so she's been sneezing, coughing and sniffling everywhere, it started on Caturday and yesterday, she completely lost all sense of taste and smell, so we're wondering if it's a covid variation??? She's a little better today and can smell plus taste again, though not in its normal capacity yet.

This is why today's post is a little late, but better late than not at all! MOL

What Happened to Tammy?

If mew remember on Monday's post when Angel Humphrey was here, and we mentioned he arrived at BBHQ in 2000 with another kitty called Tammy, well Tammy became Millie or Miss Mildred Marbles. We have mentioned her before on the blog, but for those who missed it, here's all about Millie. 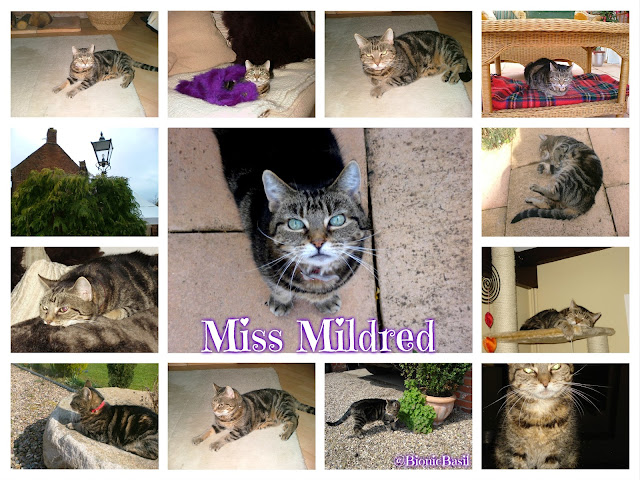 Let's tell mew a little about her backstory.

Miss Mildred's story began at an old people's home in Mansfield, Notts. She was part of a 100+  feral colony, and slowly all of the cats were trapped and neutered, then rehomed.  Mildred escaped the trap for quite some time and lived in a broken greenhouse while the kindly residents still put food out for her. When she was eventually caught, Brenda our local Cat Rescue Lady had her neutered, and she was in the next cage to Humphrey when the P.A. was at the rescue. In fact, they were the only two cats there, the ones left behind. She was tiny for her age, no bigger than a 6-month-old cat when she was 2 years old.
When the P.A. brought the pair of them home and released them from the carriers. Humphrey settled in like it had always been his home, yet Mildred ran upstairs into the spare bedroom and hid up inside an antique bed. She spent 3 months in that room, hiding on the wooden lats up between the bed springs under the bed, so the P.A. set up a litter box and feeding station, so Mildred didn't have to go far. The P.A. also spent the next 3 months half lying under the bed trying to coax her out for up to 3 hours a day, and eventually, one day Mildred just appeared in the kitchen, sitting on the table and she never looked back.
Being from a feral colony she was terrified of people, but slowly as time went on she became the fussiest fuss monster ever; like seriously, mew would never have believed the turnaround in her trust and demeanour. She would chase the P.A. around for pats and then she'd start to dribble. Mew would have never thought that a cat so small could compete with the dribble levels from a St Bernard, but she did and won paws down.
She loved to play for hours on end, and to say where she started out in life and where she ended up, it was like North and South Pole. The difference was incredible.
Sadly in late 2008, she started to cough up blood, and after a trip to the vets, it was discovered she had a tumour between her lungs and nothing could be done to save her.
Miss Mildred departed over the Rainbow Bridge on the 29th of January 2009, and to this day no one has taken her crown for the fussiest, friendliest dribble monster in BBHQ history, and she was also the reason for so many other unwanted kitties being adopted by the P.A.'s friends because once they'd met her, they wanted a cat of their own.
Miss Mildred Marbles was truly amazing and is sadly missed every day too, and for such a small cat she had the biggest heart mew could ever imagine.

So that's what happened to Tammy. She had an epically epic life at BBHQ. 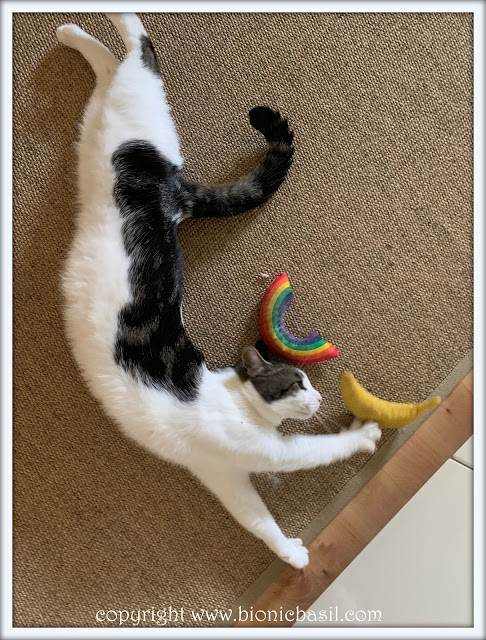 The other day Melvyn was channelling his inner banana, after experiencing the Yeowww catnip banana and rainbow.

We think he was really having a good time!! MOL

What Do Tripaws Do All Day?

If mew've ever wondered what tripaws do all day, we can tell mew this; there's a lot of reclining in various locations around the garden, especially when it's sunny. 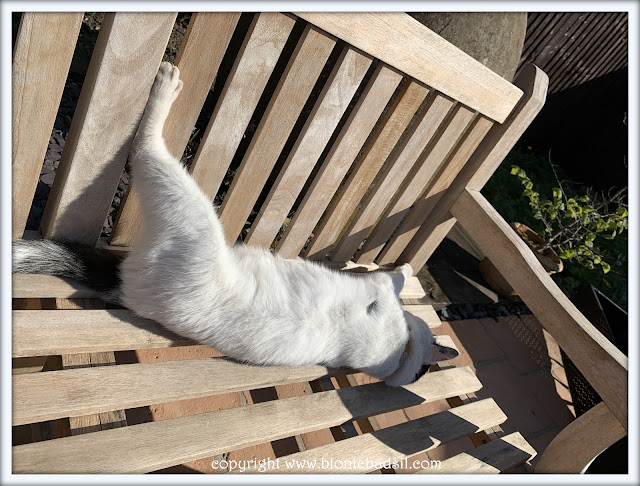 Here's a typical afternoon in the life of Smooch. He's on the bench near the pond completely snoozing his fur off!
Although if mew asked him, he'd say he was guarding the catnip by the summer house, oh, of course mew are, with your eyes closed, upside down fast asleep!
Who does he think he's kidding???!!! MOL MOL

That's us done for today as the P.A. needs to go and find a box of tissues, as she's just run out.

Amber will be back on Friday with another fab book just for mew, and click the link if mew missed Monday's post click here to catch up on Man Cat Monday with Angel Humphrey.