And furst on the podium is Basketcase Fudge, this was only taken yesterday so it hadn't even made it into the archives.

The P.A. had purrchased a new little waste basket and placed it atop the drawers in the dressing room to let wicker air out before putting it on the floor - if it smells funny Smooch is likely to take umbridge to it and pee on it, so we have air things before final placement - anyhoo there it was minding its own business when Fudge decided he needed to investigate it further. 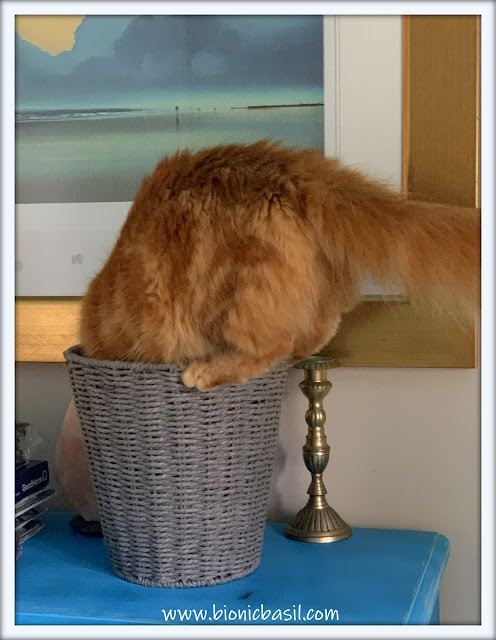 "Dude, mew're neffur going to fit!" I said, as he kept squirming his floof until... 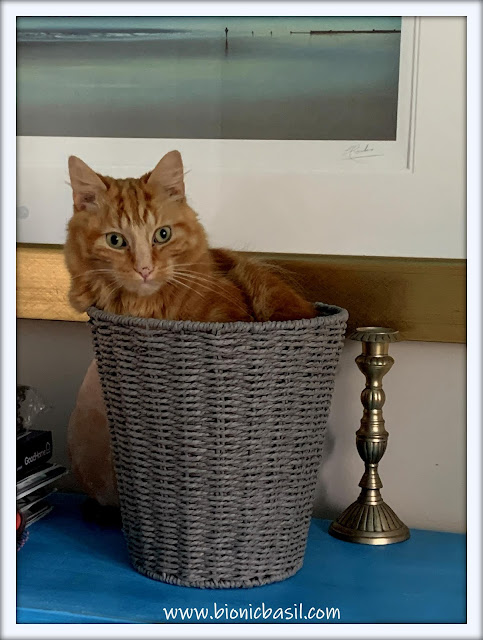 ... a few minutes later he proved me wrong, although he doesn't look that comfy, more startled and utterly surprised that his floof actually fitted! MOL MOL

Next up is Parsley's Catnip Dilemma. 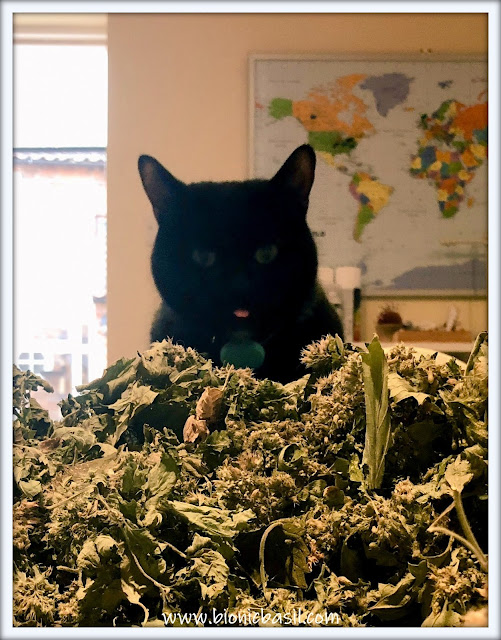 Sometimes there's more catnip than one can pawsibly cope with in one sitting, and this is that defining moment of realisation for Parsley!

And finally, I Basil am sharing a fluffer from way, way, way back aftur a rather invigorating mouse hunt in the cold bonfire ashes down the field, the P.A. accused me of taking up chimney sweeping when I returned home! MOL 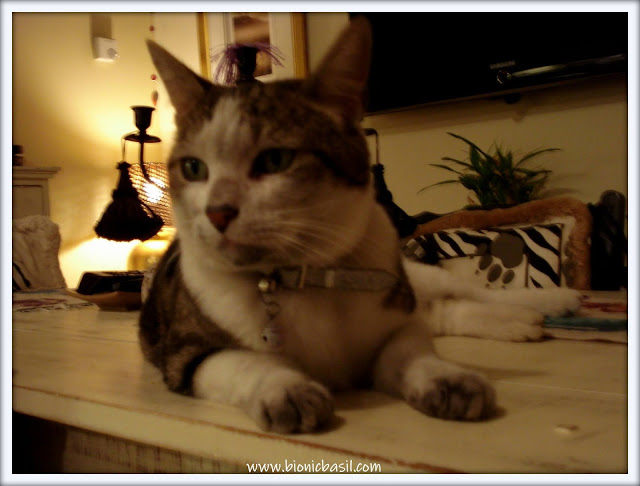 1. You will never find a mess in my home, I like to keep things neat, tidy and organised as in the long run it saves time.

2. Once (or twice) a year, I get my hair trimmed and highlighted; it's between waist and hip length so it never needs much taking care of other than a quick trim plus colour, and I feel so blessed I don't have to spend my time going to the hairdresser every few weeks. My stylist also teaches hairdressing students, and she likes takes a photo of my hair from the back to show them what natural length looks like, not fake extensions, as most of them don't believe that hair can grow like mine and last time she was here she even measured the length and I burst out laughing when she told me it was exactly 3 ft or 91.4 cm long, I felt like Cousin It! LOL

3. Speaking my mind has gotten me in trouble. Apparently, some peeps don't like straight talkers, and I make no apologies for saying it how it is. If you want an untruth or some veiled version of the truth go ask someone else, I don't have time for rubbish like that. My motto is; say it how it is or say nothing at all.

4. The last time I went to a kitty rescue was when we went to fetch young Melvyn, who was actually called Malcolm.

We do hope mew enjoyed our final bloopers post, and next week Amber will be here starting up her usual Friday Book Reviews again so mark that in your diary as mew know how she gets, and we don't want to make her any more angry than she is already! MOL MOL