Welcome To 8 Things About... And Today It's All About Fudge 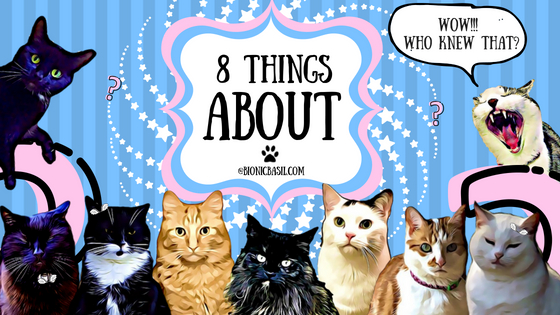 Today as we suddenly ran out of time we're reposting 8 Things About... FUDGE  from last June [2018]

So what's this 8 Things About??! we hear mew ask.  Well fabulous furriends it could be 8 things about anything, but today it's all about...

...as he's the youngest** [**Mevyn now takes this position] memfur of The B Team and has only been on the blog just offur a year, so we thought we'd share a bit more about him today. 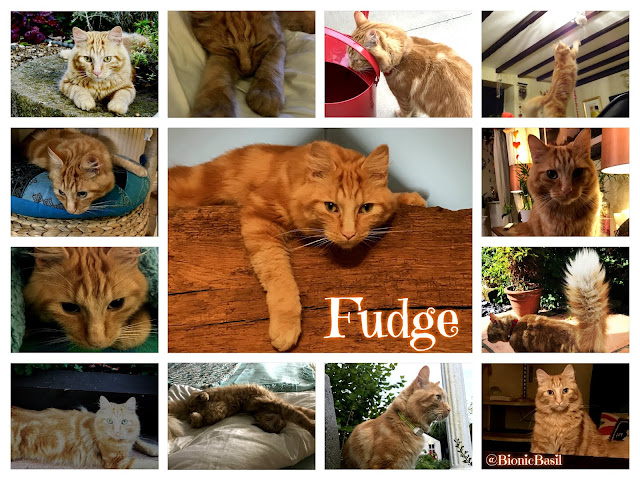 1.  He loves Dreamies aka Temptations, really loves them, in fact he'll meow incessantly to get some.  He also knows that effury morning when the P.A. is just about to leave the house fur work and is getting her lunch ready that is the optimum time to ask, and ye shall receive! MOL

2.  Fudge is obsessed with water; when he furst arrived in Mewton-Clawson and was able to have the run of the house, he'd sit by any of the sinks to catch the drips, he would even sit on the edge of the shower to lap up a few drops. He loves to drink from: the watering cans, the burdbaths, puddles, the pond, and a small upright fountain on the patio, etc... 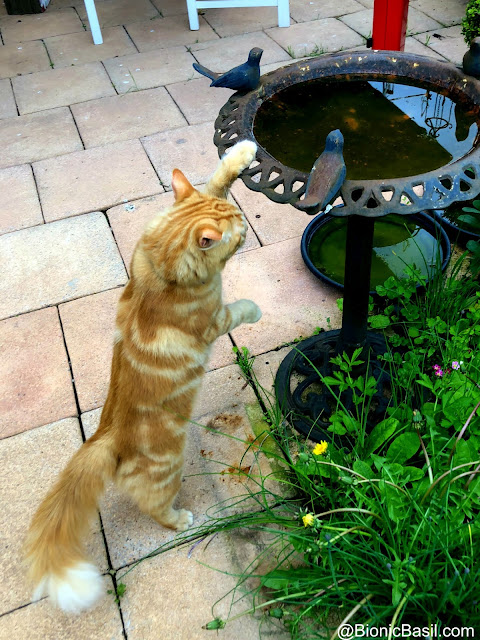 3.  He also likes to go eat from effurypurrdy's dish at mealtimes, and he loves to lick the jelly, gravy or sauce off the meaties and then move on to another dish.

4.  Fudge isn't the brightest memfur of The B Team, in fact I think he's a couple of sammiches short of a picnic, but his lack of brainpower is made up fur in FLOOF!  He has the most magnificent tail, and MommaKat & Bear do make us laugh hysterically when they call it: Fudge's Vaguely Pornographic Tail, though we can totally understand why! MOL MOL 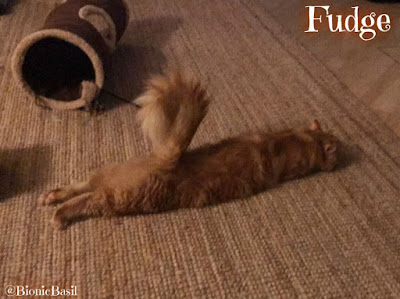 5.  He also loves to climb, he zooms up the trees in the garden and especially the one in the courtyard, which he uses as a springboard onto the roof, where he subsequently gets stuck and the P.A. has to lure him down with a bag of Dreamies! MOL 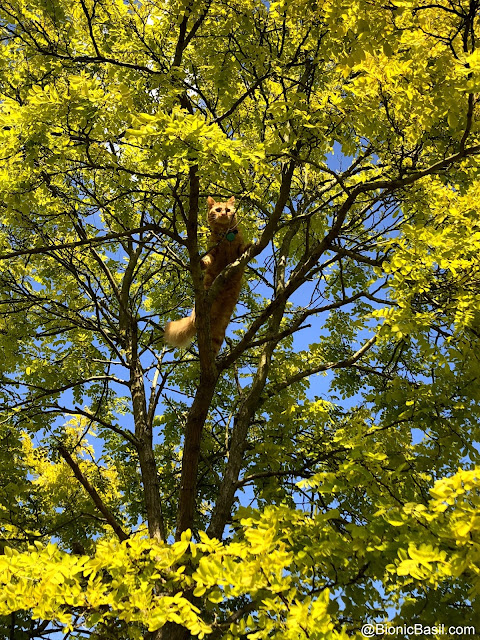 6.  Fudge is furry kind, there's not a mean bone in him.  He loves to snuggle and likes to get curled up in bed. He can be furry demanding when he wants attention, fur example; anything the P.A. is reading gets knocked out of the way, the cell phone has to be put down immediately fur him to have his pat needs met, and if the P.A. is in the office he'll pat her leg or arm with his paw and if that doesn't stop her from typing he then sits on the keyboard:-

7.  He has the hairiest paws out of the entire B Team. 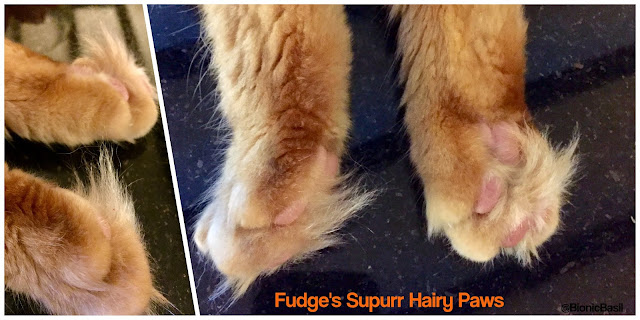 8.  Lastly I think he's made such an epically epic addition to The B Team and his training at our Kitty Commando Training Academy is coming along fantastically.  He's now proficient in most weapons, he can drive most of the vehicles on site and is currently learning how to drive my new Unimog, he can even use the winch... how pawesome is that?

And that sadly brings us to the end of 8 Things About Fudge... we do hope mew enjoyed getting to know him a bit more and we'll be back on Wednesday with The Pet Parade.

If mew missed any of our previous '8 Things About' posts, here are the links so far, as we still four more to go in this series:

Thanks so much fur visiting today