Welcome To 8 Things About... And Today It's All About Angel Posie **Plus** TOP SECRET BONUS INTEL 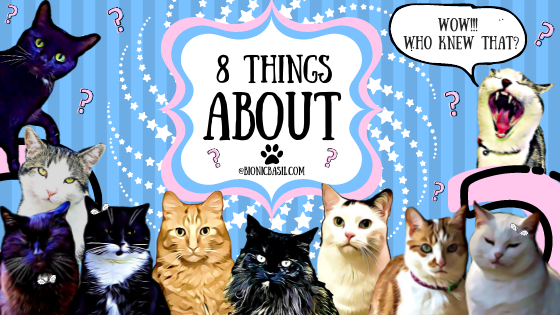 Posie departed for the Rainbow Bridge in April of 2015 but that doesn't mean she isn't still a part of The B Team, she left a great big paw-print on our hearts.

1. Posie arrived at BBHQ in the Spring of 2000.  The P.A. went to the rescue to see Posie, who was described as; not suitable for rehoming as she was a little aggressive. She'd been a Christmas kitten and obviously soon after the festive novelties wore off, poor Posie found herself homeless. She was found on an inner-city housing estate looking rather bedraggled and in a bit of a bad temper.

The P.A. remembered the first time she saw Posie, although she can't remember the name the rescue gave her. The P.A. said she looked really grubby and was rather feisty and vocal in her outdoor pen, there was no chance of any interaction at all. Who knows what had happened to her, but from her behaviour, it couldn't have been very nice. Anyhoo, long story short, the P.A. brought her home as she knew that this little cat didn't have a chance of getting a home. 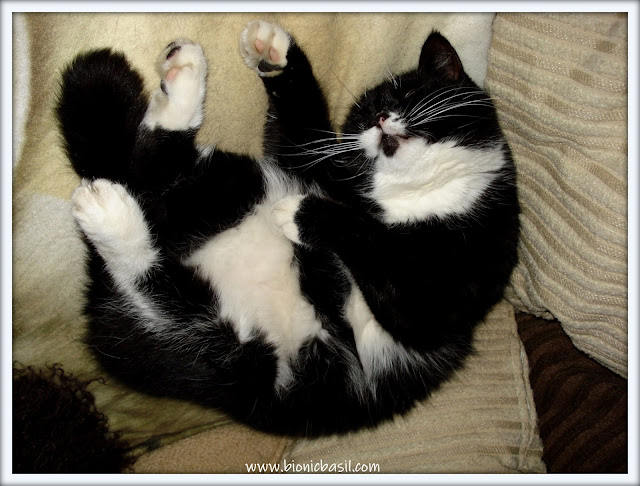 2. Posie was never a lap cat, her early life experiences ruined that for her.  Although she slowly accepted the odd cuddle and she did like a bit of brush after many years of perseverance. In fact, Pandora is very similar to Posie in a lot of ways. Above, is how Posie loved to relax. 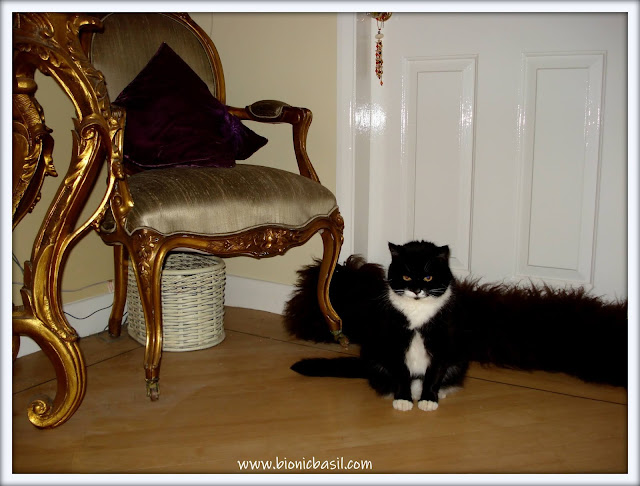 3. In this pic from 2008, above, OMC was Posie hissed off!  The old kitchen cabinets were being ripped out and redone, so the doors were all shut and she couldn't get to the lounge - she gripped and grumbled for days. 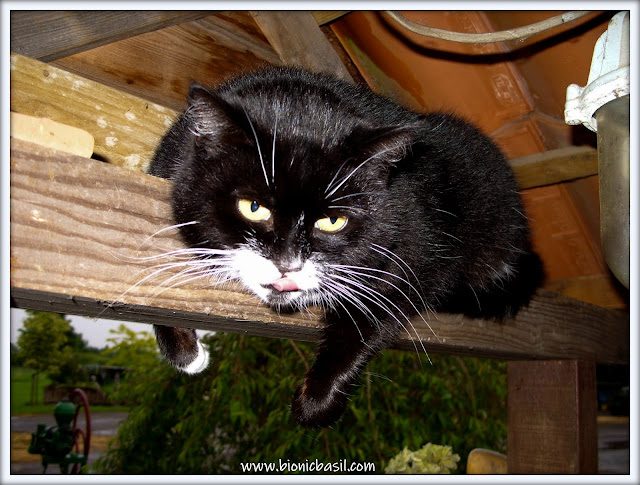 4. She also liked to go to next door to the P.A's Uncle's place. He had a fake Well in his garden (A lot of English peeps have fake Wells, don't ask us why, because we don't know!).  Anyhoo, Posie would sometimes get inside the little roof and hang out. 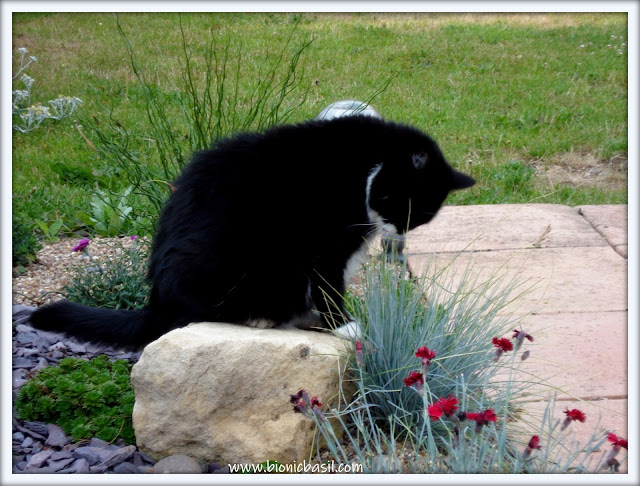 5. Posie adored being in the garden and outside. And in the early days at BBHQ, the P.A. had some comfy chairs under the carport and that's where Posie, Snowie, Mildred and Humphrey would be waiting when she got home from work in the evening. 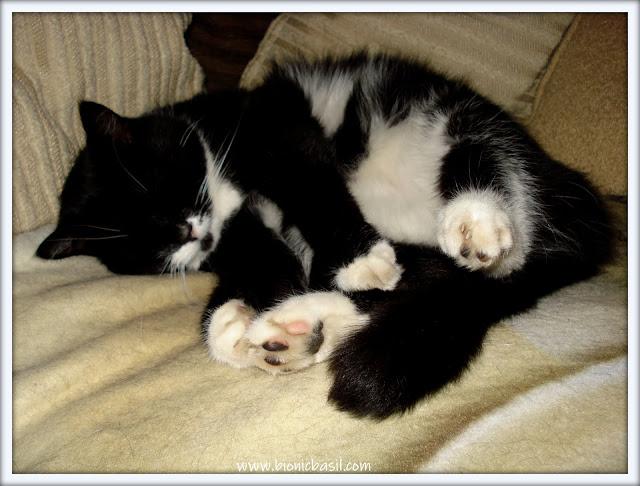 6. Posie loved the sofa, that was her main spot to snooze and she loved a fresh blanket. Often Snowie would be nesting in one of the cushions behind her on the back of the sofa.
7. She also liked to play, and loved a bit of catnip.  She liked to remove the decorations off the bottom of the Christmas Tree too, apparently, that was good overnight sport! MOL 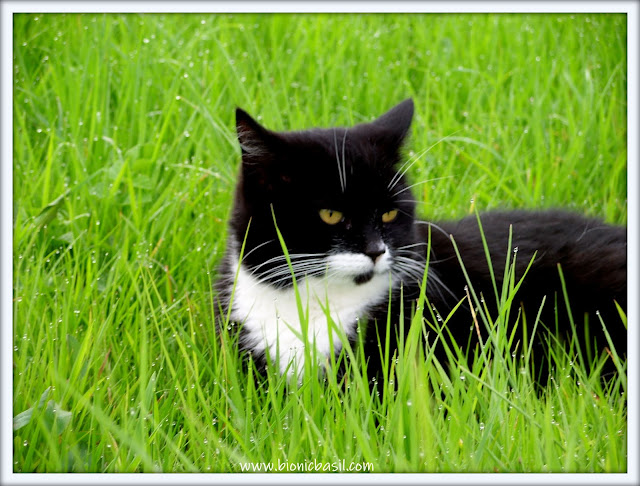 8. Posie was such a pretty cat with the most amazing golden eyes. We miss her feisty, diva-esque ways, and we miss her cuteness because she was adorable, bad-tempered but totally adorable!

Posie was terrible to crate, so the one thing Dad and the P.A. don't miss is trips to the vet with the whirling dervish. The P.A. would wear thick leather gauntlets to wear while getting her into the crate or box. Over the years they tried all types of crates; front loaders, side loaders, top loaders. Wire ones so it wasn't so confining, also bags with mesh sides and top. Posie hated each and every one with a passion.

Also, the P.A. would take the gloves with her to the vet and wear them during the visit. Better that than scratched hands if Posie decided she didn't like that particular vet, on that day.

Although Posie was a feisty diva, we're just glad that after a really rough start in life, she got a forever home on her terms.

And that sadly brings us to the end of 8 Things About Angel Posie, we do hope mew enjoyed getting to know her a bit more and we'll be back on Wednesday so do join us then.
.
If mew missed any of our previous '8 Things About' posts, here are the links so far:

8 Things About Melvyn
8 Things About Fudge
Thanks so much for visiting today and we'll be back on Wednesday, so do join us then.
Pawesome purrs
Wing Commander Basil & The B Team

graphics created with paid licence www.canva.com
Posted by Basil and The B Team ~ BionicBasil ® at 11:30